Earlier this year, it was discovered that data from 50 million Facebook users was acquired by political consulting firm Cambridge Analytica without their permission. The revelation has shed new light on data responsibility, as Facebook suffered from considerable backlash from consumers through the #DeleteFacebook movement.

Day Two of #Zuckerberg hearings! I have my popcorn ready for Mark’s acrobatics.

Keep checking back as we continue our live coverage and analysis of the Zuckerberg testimony:

10:14 AM: When asked if Facebook will change user default settings to be more privacy protective, Zuckerberg says, “Yes.”

10:18 AM: “Is there any reason why we can’t have a data sharing prevention for children under 18?” Zuck points to number of measures to protect child safety, including the flagging of inappropriate content for minors, but says teens can opt-in to share things publicly.

10:23 AM: “It’s inevitable for there to be some kind of regulation…but we need to make sure it’s the right regulation.” – Mark Zuckerberg

10:30 AM: Zuckerberg says Facebook began notifying users who had been affected by the Cambridge Analytica breach.

10:41 AM: When asked if Facebook is willing to change its business model to help better protect consumers, Zuckerberg says, “I’m not sure what you mean.” In other words, would Facebook consider switching to a paid platform, sans ads.

10:46 AM: Clarifying cross-tracking on devices: “We track certain info for security reasons and for ad reasons. For security, when people who aren’t signed into FB, we can’t scrape information. For ads, we provide an ad network that third-parties can run in order to make money. Anyone can turn off ad targeting, but we don’t turn off measures for security.”

10:56 AM: Consumers can know what data is being acquired when logging into third-party app but users don’t always pause to view the details.

11:00 AM: One of the tenants of GDPR is portability. Does Facebook plan to comply with the GDPR portability requirement? “Consumers can download and move their data anywhere they want, but we’re updating those settings to make them more available.”

11:01 AM: GDPR also gives users the right to reject the processing of their personal data for marketing purposes, including micro-targeting for ad purposes. Will the same right to reject be implemented for US consumers? “I’m not sure how we will implement that yet,” says Zuckerberg.

From the excellent @RepDianaDeGette, the epic: “You’re the CEO of the company, correct?” Also: “We continue to have these abuses and these data breaches. I think one of the things we have to look at in the future is putting really robust penalties in place.”

11:35 AM: Kogan (of Cambridge Analytica) also sold data to other firms. How many total and what are their names? “I don’t believe it was a large number, but we’ll follow up with you.” Zuckerberg is dodging this question hardcore. “What’s a large number?” congresswoman asks. “A handful,” says Zuck.

12:10 PM: “The ad business model is in service of the social mission [Facebook] has, and I think sometimes that gets lost.”

12:23 PM: Zuckerberg says American Facebook users will have similar GDPR protections. “Will they have it by May 25th?” asks Rep. Jerry McNerney, Calif. “We’re working on it,” Zuckerberg said.

12:53 PM: Rep. Paul Tonko, NY, reads off concerns from constituents — the majority of which focus on trust. “What liability does Facebook have?” Tonko asks.

12:56 PM: Zuckerberg questioned on presence of illegal pharmacy ads on the platform. “If people flag those ads for us, we will take them down,” Zuckerberg said, pointing out the need for Facebook to build tools like AI that will identify violating ads without human review.

1:05 PM: “Oftentimes, technology folks think a lot about what they can do, rather than what they should do. I want to talk about the should-dos.” Rep. Bill Johnson, Ohio

1:18: “Congressman, I do not believe that we have.” Zuckerberg on whether or not Facebook has destroyed any records connected to Cambridge Analytica investigation.

Almost feel bad for Zuckerberg. There’s no way he left that room full of old people without having to set up their wifi.

1:59 PM: Testimony resumes with Rep. Susan Brooks, Indiana with questioning on Facebook’s role in fighting terrorism and recruitment. “Terrorist content and propaganda has no place in our network,” Zuckerberg says, noting the platform has a 200+ team working on counterterrorism efforts.

2:12 PM: Rep. Markwayne Mullin, Okla., questions Zuckerberg on content control, and how users can manipulate their settings to block data collection. Zuckerberg says those controls do exists and “we try to make those controls as easy as possible” for “people to configure their experiences the way they want.”

2:17 PM: “I think that GDPR is going to be a very positive step for the internet,” Zuckerberg said, noting the benefits of putting controls front and center for consumers. When asked if the EU had “got anything wrong,” Zuckerberg said he’d “have to think about it.”

Now that Tax Day is behind us, retailers are waiting to see if the government’s stimulus checks will… 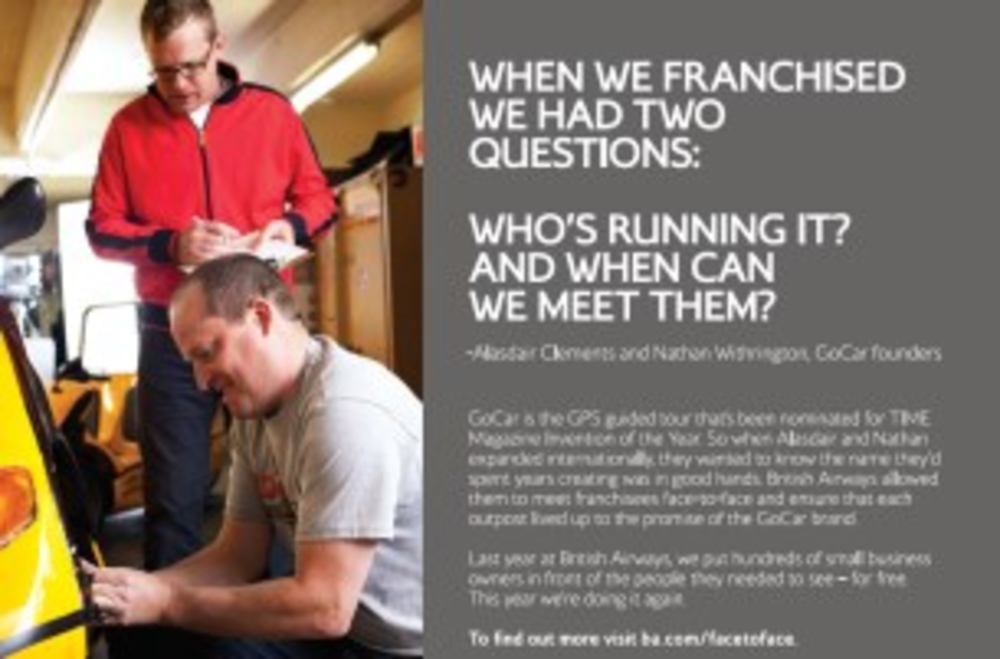 The Offer: British Airways brought back its “Face-to-Face” campaign for a second year in a row, promoting in-person…