Wallach revealed that Ticketmaster retains “all this incredible data in the U.S.,” which includes data from over 100 million credit cards stored in the ticket seller’s database. “We could use this data beyond selling more tickets,” Wallach says. “We could use it to help brand partners sell more of their products and really understand the entertainment habits of concertgoers and sports fans, then correlate that information against hundreds of other things, both geographically and psychographically.”

The growing ubiquity of mobile devices has also made it easier for Ticketmaster to drive sales by simplifying customer outreach. Wallach noted that prior to the advent of mobility, 44% of potential customers didn’t go to a show because they didn’t know it was happening. “As marketers, we failed them because we couldn’t figure out the best way to get to them,” he says.

Not only have mobile apps made it easier for Ticketmaster to facilitate commerce by simplifying the payment process — Wallach says once users input payment information on the site, it can be accessed swiftly by mobile device — apps are instrumental in notifying prospects about relevant opportunities. “For those of you in New York City, if you had our app, it would geotarget that you’re in New York and you could look at all the concerts and events,” Wallach says. Additionally, by scraping an iTunes library, the app notifies users when a favorite artist is performing near a customer’s location.

For brands, mobility has created an easy way to support cross-promotions by eliminating some of the overhead traditionally associated with such endeavors. “There was always this notion that for every dollar you spend, you’d have to spend three or four times that in activation,” Wallach says. “All those expenses might keep you from getting involved. The beauty with mobile is, that goes away.”

Going forward, Ticketmaster aims to improve sharing, particularly on Facebook, where 95% of sharing occurs, according to LiveAnalytics data. Twitter was not part of the study.

Ticketmaster’s 2013 mobile endeavors include geofencing — which Wallach says could be tied to promotions — and service sign-ups or bounce-backs to retailers following a live event. Ticketmaster also intends to invest in crowdsourced content, and near field communication technology for payments and content distribution, as well as augmented reality for navigation and information distribution. These efforts will allow brands to integrate their products into live events “in an organic way,” Wallach says.

“When I was growing up, it was lighters,” Wallach says. “Now [concerts are] lit up with all kinds of different phones.” 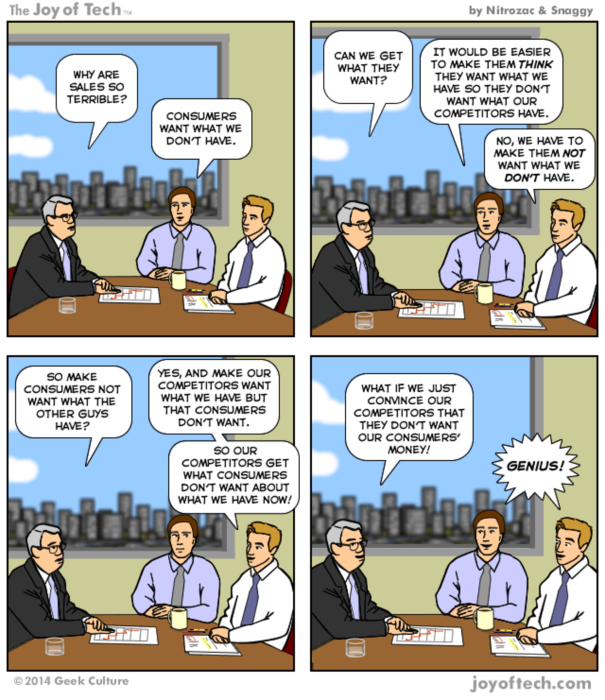 Comic: Inside a marketing strategy meeting

Friday funnies from The Joy of Tech