Today Pinterest introduces promotional pins that look like regular pins, except they’re sponsored posts (and labeled as such). Ben Silberman, Pinterest’s CEO and cofounder, first announced that Pinterest would start experimenting with sponsored posts in a September 19 blog post.

And Pinterest isn’t the only visual social platform plunging into the monetizing pool. Just days before its third birthday, Facebook-owned photo sharing app Instagram officially announced that it would introduce ads to its feed. This announcement came about a month after Emily White, Instagram’s director of business operations, told The Wall Street Journal that Instagram would start selling ads within the next year.

Apu Gupta, CEO and cofounder of Pinterest and Instagram marketing and analytics suite Curalate, says the timing of these two announcements is just coincidental. However, he says the two networks could learn a thing or two from Tumblr’s introduction to sponsored posts, which the blogging platform announced in April 2012.

“It took a while for Tumblr to figure out [how to use it],” Gupta says. “Pinterest has the benefit of recruiting people who have done this already. They brought in a lot of really smart folks from Facebook.”

Marketers are constantly chasing after the next shiny social channel. According to Semiocast, a social media data intelligence and research company, Pinterest has more than 70 million registered users, 20 million of which pinned, re-pinned, or liked a pin this past June. And Instagram claims more than 16 billion photos have been shared since its October 6, 2010 debut. This mass migration towards visual platforms, Gupta argues, forces Pinterest and Instagram to strike a balance between responding to brands’ needs and staying true to their own identities.

“You’re trying to balance the ethos of a platform with the demands of a brand,” he says. “That’s a challenge because most brands—for better or worse—want to buy reach and buy ads. Frankly, a lot of brands’ ads are interruption-driven. They stand out. That can really be jarring in the native experience.”

But is all this social hype really necessary? Gupta thinks so. He argues that social has evolved from a novelty to a necessity. And because brands need to invest in social, marketers are looking for new ways to make social accountable and generate ROI. Gupta says imaged-based platforms, particularly Pinterest, bring a level of specificity that’s unmatched by other networks like Facebook. For example, instead of seeing that a consumer likes GAP, marketers can see exactly which GAP sweater a consumer pinned, he explains.

“If I’m the GAP, I can leverage that to get in front of the right people, instead of assuming that my buyer is an 18-to-35-year-old woman,” Gupta says. “That level of specificity means that I can target the right people in a really relevant way.”

What they’ll need to succeed

But Gupta says Pinterest’s monetization efforts don’t have to end on the network. Theoretically, Pinterest could monetize an ad network and serve targeted ads to online consumers by featuring products consumers have indicated they like, such as by pinning them, or by featuring similar products, he says. He also notes that this form of advertising could be less disruptive than Pinterest’s promoted pins on-network.

However, if Pinterest chooses to ignore its relevant data, its advertising attempt could fail.

“If you just try to pursue the dollar quickly—‘I’ll just sell to the highest bidder’—those ads aren’t going to be relevant to anybody,” Gupta says. “It’s certainly going to buy reach, but that’s going to be a terrible experience for everybody. That will be short-term gain…but it will be very detrimental long-term.”

Irrelevant ads could also interrupt the user experience on Instagram, Gupta says, particularly because Instagram images occupy the majority of a user’s mobile screen.  According to Instagram’s official announcement, users may start to see photos and videos from brands they don’t follow. However, the brand promises to “start slow” and focus on making any ad “feel as natural to Instagram as the photos and videos many of you already enjoy from your favorite brands.”

But Gupta isn’t so sure.

“If you, potentially, have a whole screen takeover from some brand that you don’t have a personal relationship with, I would find that to be a little bit concerning,” he says. “To me, that feels like, ‘let me monetize my platform because I can,’ but not necessarily because this is in the best interest of the user experience.”

As for the next imaged-based network to hop on the monetization bandwagon, Gupta puts his money on photo messaging app Snapchat. Brands like Taco Bell have already started using Snapchat, and with 20.8% of U.S. iPhone owners using Snapchat as of August 2013, according to mobile marketing intelligence service Onavo Insights, Gupta predicts that more brands will follow. In addition, he expects Tumblr to broaden its ad products and offer a more integrated, visual ad unit.

Like most Americans, there has been something missing from my mailbox for months now – countless credit card solicitations.… 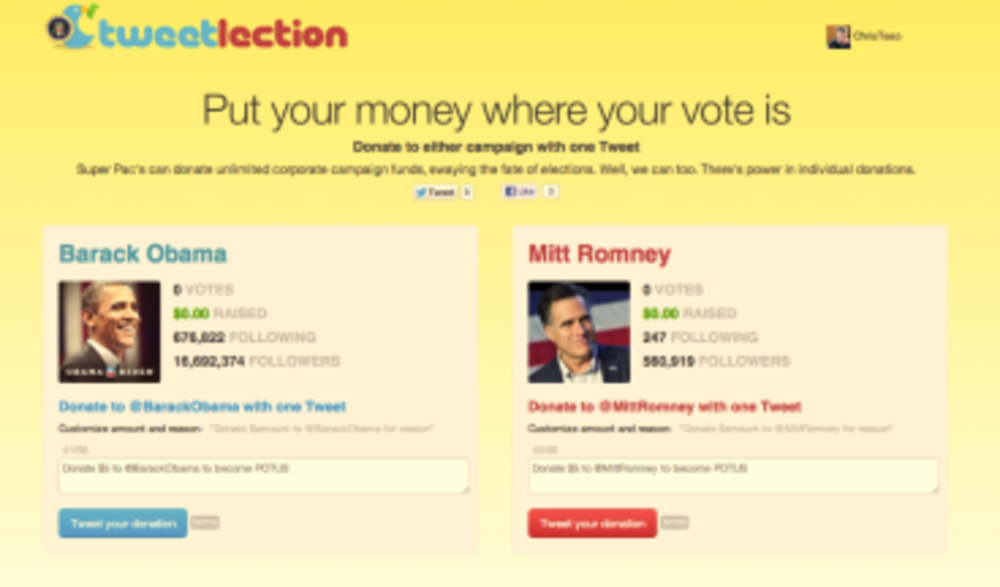 It was only a matter of time. On June 19, Portland-based Chirpify announced its Twitter Fundraising for Politicians…