These were just a few of the monster trends that are about to shake the world of direct marketers, according to direct mail guru Don Libey, who spoke at the Direct Marketing Club of New York’s April luncheon at the Yale Club. The luncheon was sponsored by White Plains, NY-based MeritDirect.

“We have endless silent partner increases ahead,” said Mr. Libey, discussing the first of several monster trends. “If you sell something, print something, publish something, or send something through the mail, you are faced with endless, unsustainable silent partners.”

The silent partners, he said, are the U.S Postal Service, UPS, FedEx and Google.

“Massive postal increases, 13 percent increases for international delivery by UPS, increases by FedEx, fuel surcharges,” he said. “What we have done is abducted our control of our business in direct marketing because we are remote.”

Mr. Libey is also a long-time industry futurist, consultant and strategist to CEOs and boards, and the author of eight books on marketing, future change, and the economic and technological influences on the global marketplace. He is the editor of the Libey Economic Outlook, the bi-monthly, in-depth analysis of the economy and its implications for circulation and marketing strategy, published by MeritDirect. Mr. Libey has operated numerous direct marketing, catalog and publishing companies as an owner, director or CEO.

“Cut back on prospecting and you cut back on the lifeblood of your company,” Mr. Libey said.

Another monster tend is talent absorption in the direct marketing industry.

“Talent absorption is enormous,” he said. “The private equity firms are soaking up all the rainmakers and paying bug bucks. Your work is remarkable… and we need lots more of it.”

A monster trend Mr. Libey is particularly concerned about is net neutrality. He suggested that special interests, lobbyists and politicians are choosing money over equality for the Internet, and that speed and access will cost direct marketers more than postage does today.

“We act together [on this issue] or we die,” he said. “That’s what it is gong to take. We need to be heard. Our interests need to be protected.”

He said the move to smaller catalogs is concerning.

“I think any form of retreat in the face of silent partners is tantamount to giving up, and I think we need to find new solutions,” he said. “We need to forge new partnerships. We need to do things that will lead to an expansion of our industry, not a contraction.”

Mr. Libey said another monster trend is online intensity, and it is only going to get more intense.

“We’ve only seen about 10 percent of the ultimate online share of the market basket,” Mr. Libey said. “Expect a near-doubling of online influence and sales over the next three years. “

He said this trend is dangerous because it is moving people away from the basics, such as offers, lists, and response.

“We are embracing technology at a dangerous rate, and we cannot turn away from it, so we must begin to harness it and understand it,” he said.

“I don’t know if globalization is good or bad,” he said. “I just ask what if.”

The last monster trend Mr. Libey spoke about was the fact that there is enough knowledge and experience now to create the first fully integrated, fully analytic and working enterprise-wide, multichannel, operating system.

“The systems are about to be built, taking this industry to the next level, tying all of the channels together flawlessly,” he said. “Some of you will be there and some of you will be observing, and it’s going to be expensive. Where will you get the money?”

Finally, Mr. Libey said that this is the most exciting time he has even seen in the direct marketing industry.

“It is fraught with challenges,” he said. “It is also separating the players and the also-rans. It embraces new worlds and new channels. It is global. It is expensive. And it is going to be two or three times its size in twenty years. Welcome to the dawning of the new direct marketing.” 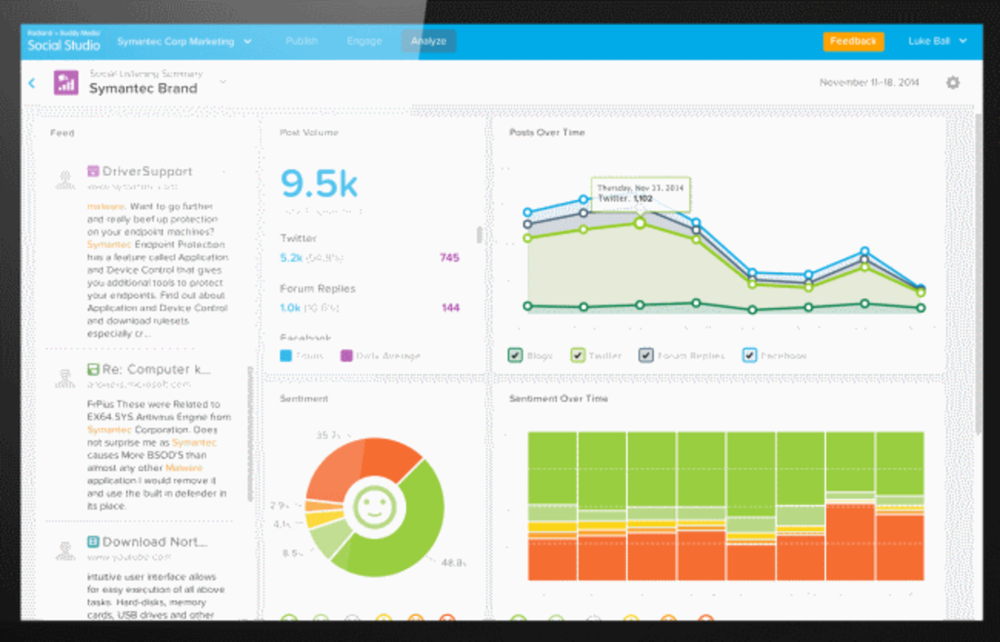 Salesforce is extending the capabilities of its Social Studio platform to now include marketing, service and sales functions.…