As a creative in the advertising field, I’m constantly seeking new
approaches, inspirations and strategies to fuel my work. Sometimes I find what
I need through the usual suspects – design blogs, marketing publications and
research articles – but recently, I found inspiration in an unlikely source
that was both an entire industry away, and yet walking distance from where I
sat.

Pulsing like parallel arteries through the center of New York
City, Broadway and Madison Avenue notoriously house two of the greatest
industries of the modern era: musical theater, and advertising, respectively.
At the surface level, they could not be more different. One is primarily a
function of art, the other a function of business; one is jazz hands, the other
handshakes, and so on. But a deeper look reveals that the two actually share a
common currency – persuasion – and it turns out there’s quite a lot of
transferable wisdom beneath those flashing lights. Here are eight lessons
lifted from the theatre that can also drive creative success in advertising:

1. Craft a compelling story.
Advertising and theatre share two core goals: to captivate, and to motivate.
The best way to navigate these goals is to build a story. In both, the
captivation is formulaic; set a scene, introduce a character or set of
characters, and establish a problem or conflict that will be solved through the
progression of the story. The motivation is what the story aims to instill in
the audience – the result, or ROI. This could be as broad as evoking an
emotional response or opening up a new paradigm for the audience (i.e. a high
level brand campaign), or as specific as persuading them to take a targeted
action (i.e. a lower funnel campaign intended to directly drive sales).

2. Write a catchy chorus
The best ad copy is almost poetic, and often lyrical; it should be succinct yet
powerful. It should evoke a clear emotion or tone, and should focus on one key
message. In songwriting terms, it’s the chorus. The “chorus” in brand campaigns
is the tagline; in direct marketing campaigns it’s the call to action. It’s the message that
characterizes the entire campaign in a single line of copy, and it’s usually
the most memorable element of the creative.

3. Don’t ignore the score
If a campaign includes video creative, take the opportunity to ignite the
“chorus” by setting it to music. Whether a brand chooses to come up with an
original jingle or borrow from existing material, music can set the emotional
tone of the ad and boost message recall. At Collective, we recently launched a
brand campaign that included a video ad set to the tune of the classic doo wop
hit “Sh-Boom” (a.k.a. “Life is But a Dream”). While the music set an upbeat
mood for the ad, it played an even bigger part as the vehicle for a catchy
original chorus lyric, “life is but a screen”, that summarized the multi-screen
message of the campaign in a fun and memorable way.

4. Know your audience
West Side Story is fundamentally an iteration of Shakespeare’s Romeo &
Juliet, but the vast differences in packaging and delivery result in the two
shows appealing to very different audiences. At the end of each show, the
audience will have arrived at the same emotional destination, but will have
taken separate paths to get there.

Likewise, a single product or brand may appeal to diverse audiences, but
believing that it’s therefore possible to capture all audiences with a single
message is a marketing fallacy. To really relate to an audience, a brand must
take into account their unique needs and interests, and then cater to them. For
example, a CPG brand trying to sell a microwaveable macaroni and cheese product
to both busy moms and dorm-dwelling college students is going to need two
distinctly different creative approaches. Knowing that the busy mom’s main
concerns are nutritional value and happiness of the child will drive the
creative targeting to moms in a completely different direction than the ad that
speaks to a coed, whose main concerns are cost and ease of preparation.
Carefully tailored creative content is what allows advertisers to sell the exact same
product to different consumers without compromising the brand.

5. Choreograph
Campaigns have a lot of moving parts, which are usually left to media buyers to
sort out against budget and schedule. But if creatives can be included in the
media planning, the campaign may be choreographed so that consumers are met
with the optimal version of ad for the placement. From story sequencing to
formatting to playing off the peripheral environment of the ad placement, a
close relationship between media buyer and creative director can ensure that
the campaign is presented at its most flattering angle at all times. And now
that advertisers can employ data-driven targeting to reach consumers
efficiently and intelligently across all screens, we can only expect the
choreography to get tighter over time.

6.Improv to improve
In theatre, an actor may rehearse a joke extensively, only to find it fall flat
during performance. Luckily, live theater allows an enormous benefit to the
performer, who can pick up on the reactions and mood of the audience to make
adjustments on the fly for an improved experience. In advertising, there is
little room for rehearsal, but we now have incredible data science and real
time analytics on our side to give us similar real-time flexibility. Creative
optimization technology allows advertisers to design and test a variety of
creative combinations with real online audiences before a campaign hits full
scale, so that only the best performing versions of the creative are used in
the end. This makes for valuable insights for creatives, but also better
results for the advertiser and ideally, the most relevant and interesting
experience for the consumer.

7. You need a gimmick
Sometimes, the simplest gimmick is all it takes to attract attention to a
campaign, and if virality is a goal, this can be the ticket to social media
success. Of course, there is no guaranteed formula for achieving viral success,
but there is a surefire way to fail at it—and that’s by ignoring opportunities
to stand out. Consumers are inundated with countless ads at every turn, and for
that reason they’ve become very keen to the common tactics used by advertisers.
The result is predictable: a cynical, apathetic audience that at best takes a
critical eye to an ad, and at worst doesn’t take notice of it at all.

To cut through the noise, ad creative must take calculated risks. Engage
consumers with interactive elements, invite them to experience something novel,
tickle them with witty copy, wow them with stunning imagery, encourage their
imagination, and challenge their assumptions. The excitement and buzz around
Superbowl ads every year is living proof that at the end of the day, consumers
want to be entertained, and will advocate for brands that invest in cleverness.

8.Take a bow
After all the hard work that goes into creating a quality campaign, don’t be
shy about appreciating it. Reward those who contributed to the campaign
success, champion the final product internally among the brand owners, enter it
into award competitions, and seek feedback (including critical feedback).
Finally, look for ways to extend the most successful elements of it into future
campaigns. It may be worthy of a revival. 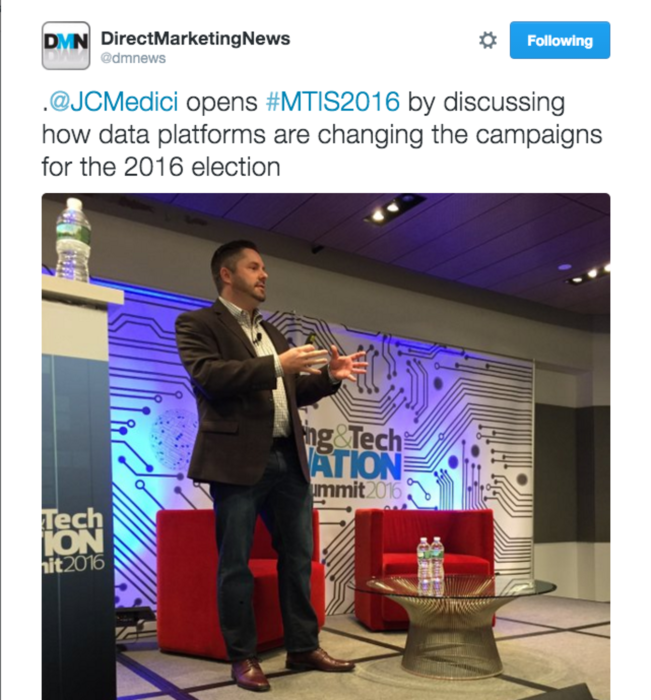 Today, All Politics Is Digital

[email protected] opens #MTIS2016 by discussing how data platforms are changing the campaigns for the 2016 election pic.twitter.com/N7TcmjJHve —…

America Online and Citigroup Inc. said yesterday they have signed a multiyear agreement to join Citigroup’s payment and…