CHICAGO — Catalogs will play a big role in eBay’s direct marketing this year as the Internet merchant takes a more formalized approach to this still-young portion of its business for the first time.

EBay has tested more than 20 standalone DM programs with varying results in the past few years including coupons, freestanding inserts, invitations to online and offline events and an inbound call center to help sellers, in addition to catalogs.

“This year for the first time we are looking at creating a 12-month plan and a long-term plan for the catalogs,” Shawn Mielke, eBay senior director of on-site and direct marketing, said last week during a session at the Annual Conference for Catalog, Internet and Multichannel Merchants here. The company will take a more strategic approach to other direct mail efforts as well.

More competition online is one reason for the new focus.

“We’ve got to be out in front of customers,” he said. “This is why offline has been an important addition.”

Also contributing are declining open rates on e-mail and increasing opt-out rates. Mr. Mielke said eBay is spoofed so often in e-mails that the company can send an e-mail with a $25 coupon and many people won’t believe it’s real.

“Compared to online, DM is expensive, but it has proven to be economical when used judiciously,” said Corner Solutions founder Ellen Sato, who has worked with eBay on its DM program.

Still another reason is the company’s slowing organic growth, which has forced it to increase marketing to sellers, Mr. Mielke said.

Whereas in the past eBay’s DM efforts aimed to acquire new customers, this year it’s more about activating and retaining customers as well as stimulating high-value customers, both buyers and sellers, he said.

“We have a slew of top users generating a significant portion of sales,” he said. “How do we maximize to make sure they spend more or don’t go elsewhere?”

Catalogs, the company has discovered, are one effective way. When it mailed a 32-page holiday book this past year, the biggest response came from top buyers.

EBay’s catalogs show items that have been available recently for auction and the average price at which they sold. The company mailed its first printed catalog in November 2004.

In 2006, eBay is testing four versions of its catalog based on product categories. The early spring catalog and summer catalog have four cover treatments: fashion, collectibles, technology and generic. The first inside spread of each continues the theme while the rest of the book is the same for all four versions and showcases the variety of merchandise offered on eBay. The books mail to customers based on past primary category purchase behavior with the goal of hooking their interest, said Haggin Marketing president/CEO Jeff Haggin, who is working with eBay on its catalog.

To the left of the recipient’s address on the back cover of the 28-page summer catalog are four personalized product call-outs and the pages on which they appear, below copy that reads: “We thought you’d like …”

The top half of the back cover relates a story from a customer about a great deal he or she found on eBay and encourages recipients to submit their own stories at ebay.com/igotitonebay.

The catalog is also an important way to tell customers about the variety offered on eBay, Mr. Mielke said. In recent focus groups, customers said they didn’t need a catalog because they already knew what eBay had to offer. However, within 10 minutes of flipping through the book, they were talking about some item or category they hadn’t known they could find on the site.

The spring catalog also was part of a DM package sent to eBay’s top 5 percent of buyers along with several category-specific coupons and a personalized letter. A follow-up e-mail also was sent.

The company also looks to stimulate high-value sellers with an eight-page quarterly newsletter called Power Up. It mails to 150,000 sellers who have been active in the past 90 days, have average sales of $1,000 monthly and receive high satisfaction ratings.

It is personalized with suggestions for eBay tools that the recipient could use based on his history and it shows his sales history. The newsletter aims to help recipients become more successful sellers. EBay has seen anywhere from a 20 percent to a 1,000 percent increase in sales activity among recipients within 90 days of getting the newsletter.

The company tested a personalized version against one without personalization, and the former far outperformed the latter.

VerticalResponse Inc. has released a new suite of e-mail marketing tools aimed at the small to mid-sized businesses.… 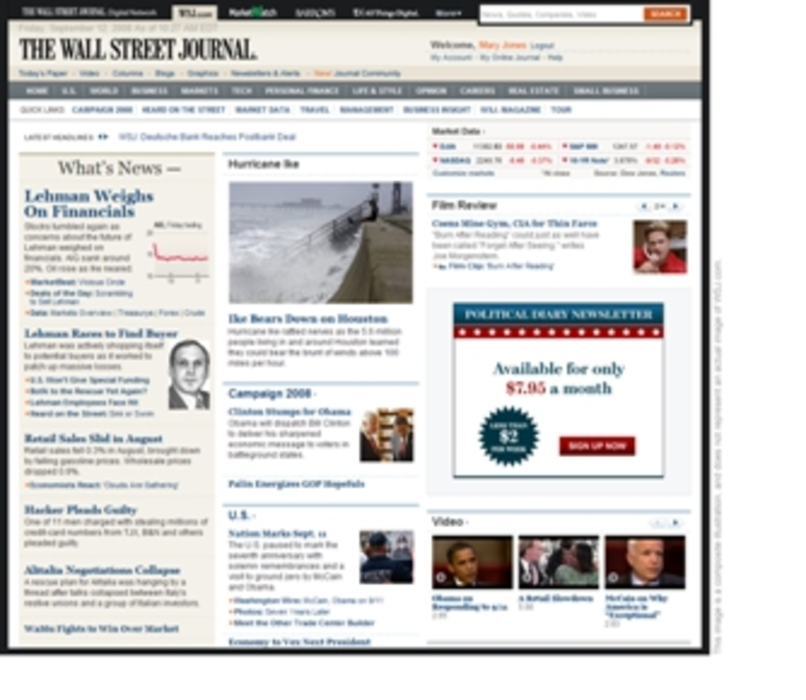 Looking to improve the user experience, The Wall Street Journal has unveiled a redesign of WSJ.com. On the new…