The Lab will use Hanover's thirteen brands, including The Company Store, Domestications, International Male and Tweeds, as a testing ground for developing new Internet promotion techniques. “The lab will enable us to very carefully monitor our consumers; and because of the multiplicity of our brands, we think we'll be able to come up with fairly broad-based rules that govern consumer behavior in this new multichannel environment,” said Rakesh Kaul, president and CEO of Hanover Direct.

Wunderman, cited by many in his industry as the “father of direct marketing,” will report to Richard Hoffman, president of the Hanover Brands division of Hanover Direct. He is described as an ideal candidate to lead the lab due to his background and track record. “We want to create a body of knowledge capital, and we believe that Lester will be very helpful to us in coming up with breakthrough ideas that have been validated by consumer behavior,” said Kaul. “The role of the lab is not just to create the theoretical underpinnings, but also create the practical rules to manage our business by.”

Wunderman describes it as a place to fiddle with new ideas and conduct experiments. “What if there's another way to do this?” he said. “What if we stop refining what we're doing [online] and see if what we're doing is the right thing? It's like a workshop or a woodshed.”

Specific areas that will be tested include e-mail marketing; copy approaches; creative approaches; appropriate lengths of copy; and slices of data that might reveal the possible solutions to some “holy grail” Internet questions like how to cost-effectively attract and keep customers, the role of catalogs and the Web as either a joint effort or separate entities, how to improve conversion, and how to stop consumers from abandoning online shopping carts, or “purchase interruptus,” as Wunderman called it. And those approaches, or solutions, should not only move merchandise but build brands as well, he said.

Testing is nothing new to most direct marketers, and even some Internet marketers, but Hanover intends to be fairly aggressive incubating ideas through its Lab, including guerilla marketing and viral marketing, according to Wunderman.

One traditional direct marketing agency executive with an interest in Internet marketing said the commitment to an Internet lab seemed like a sound idea. “You have to be really creative and think hard about a relationship strategy that will create a connection,” said Tina Cohoe, who until last month was president and chief creative officer worldwide for Foote, Cone & Belding Direct, New York. Cohoe is leaving FCB Direct to explore Internet opportunities. “A lot of e-mail marketers don't realize that there's 30 years of direct mail that came before them. You have to be relevant beyond holding a sweepstakes.”

Wunderman, who said he doesn't have the time or resources for more than a select, small group of clients, will act as consultant to the Lab through his newly-formed Lester Wunderman LLC. The lab consists of about 9 core Hanover marketing people. Wunderman also sits on the boards of a handful of Internet startup companies, including Yoyodyne, Intellipost, Mypoints.com and Infonautics.

Wunderman's other major client is the agency he helped found in 1958 and left four decades later: Wunderman Cato Johnson, a division of Young & Rubicam, where he plays a senior advisory role and remains its chairman emeritus. “Wunderman Cato Johnson has resources now that it didn't have before I left,” said Wunderman in explaining the renewed relationship with his namesake agency.

Wunderman Cato Johnson has stumbled recently, with key account losses including the U.S. Postal Service and subsequent company layoffs in the past few months. In addition, last month its president Janet Coombs, who joined WCJ/New York in May 1997, left the company. Calls to the agency were not returned.

The marketing lab was an idea originally hatched by Wunderman last year after he left WCJ. He began exploring that vision in a relationship with Mitchell Madison Consulting, New York, but that relationship dissolved earlier this year. Wunderman declined to elaborate on the details.

Two years ago, customer relationship management began to take hold in a big way in the American business… 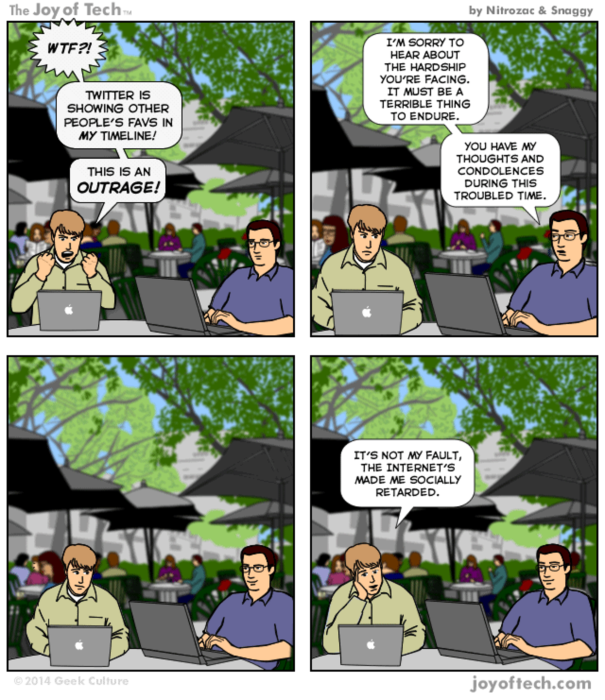 Comic: The problem with Twitter’s attempts to increase engagement

Comic via Joy of Tech by Nitrozac and Snaggy