The Internet of Things? “It will become a resounding theme for the marketing industry in the next year or two.”

That’s the confident prediction of a confident CEO, Scott Mercer, who co-founded Volta Industries five years ago based on “an idea about how to deploy technology as a kind of social psychology project.” Volta, which develops free charging networks for electric automobiles, has installed charging stations in 125 locations, and has around 330 under contract. The marketing angle? The vTowers which house the charging stations come with a seven foot screen on each side, are located on good marketing real estate, and are creating exceptional engagement opportunities.

More about that later.

In a phone conversation, I asked Mercer why this social psychology experiment was focused on electric cars. Couldn’t it have been some other product? “Both myself and my business partner”–co-founder and CTO Michael Menendez–“are really into cars. We’re gearheads; and we were looking at electric cars as the future of the car industry.” The challenge was, “Can you get people to adopt a technology quicker if you can excite them about it.” The vTowers are intended to inspire enthusiasm for the electric car concept, especially through Volta’s message “We make good things free.”

“That’s the real headline,” said Mercer. “Free is good. We’re giving back to the community, and that resonates. People see the service and say, ‘I would use that. I might get an electric car some day.'” The vTowers are sponsored by a single brand or a revolving set of brands, and are located on high quality real estate–outside a major supermarket, for example, reaching shoppers just before they shop, thus enabling sponsors to interact with people “in the real world and on the ground,” as Mercer says.

And according to Volta’s research, the free service aspect promotes engagement with the messages on the screens. Association with the vTowers boosts brand perception (“thinks about more than making money,” “innovative and cutting edge”); matches brands with attributes like convenient, friendly, and environmentally aware;and increases interest in making purchases across a range of brands (“The lift in consideration is at least 2 times the typical lift noted when testing full campaigns. This demonstrates a powerful and immediate effect”–based on research conducted by Wavelength Consulting for Volta and shared with The Hub). It’s also worth mentioning that location-focused messaging is a no-brainer for screens placed near multiple retail outlets.

The concept “absolutely could be applied to other businesses,” Mercer said, mentioning Link NYC, which is bringing free WiFi and device-charging stations–complete with advertising screens–to the New York area. “It’s exciting,” Mercer emphasized. “The Internet as a free, sponsored service.”

The first vTowers had static screen displays, but now host changing digital screens, networked to real-time data (not yet video). The main penetration so far has been west coast (or off-west coast; the business kicked off in Honolulu). It’s also a city-dense phenomenon. Sponsorship for Volta’s California network is completely sold out for the year.

As for electric car owners, they’re not the targeted viewers of the media. After all, it can typically take 45 minutes to two hours to charge a car. Nevertheless, they form an engaged core community for Volta, which is planning to roll out a mobile app with information about vTower locations. The concept has broad social media penetration, with images of the vTowers increasingly popular on Instagram.

“We’re reaching a viewer base which is hard for brands otherwise,” said Mercer. Putting digital advertising back in the real world, with high visibility, and a service element attached: the Internet of Things isn’t just about widgets and sensors any more. 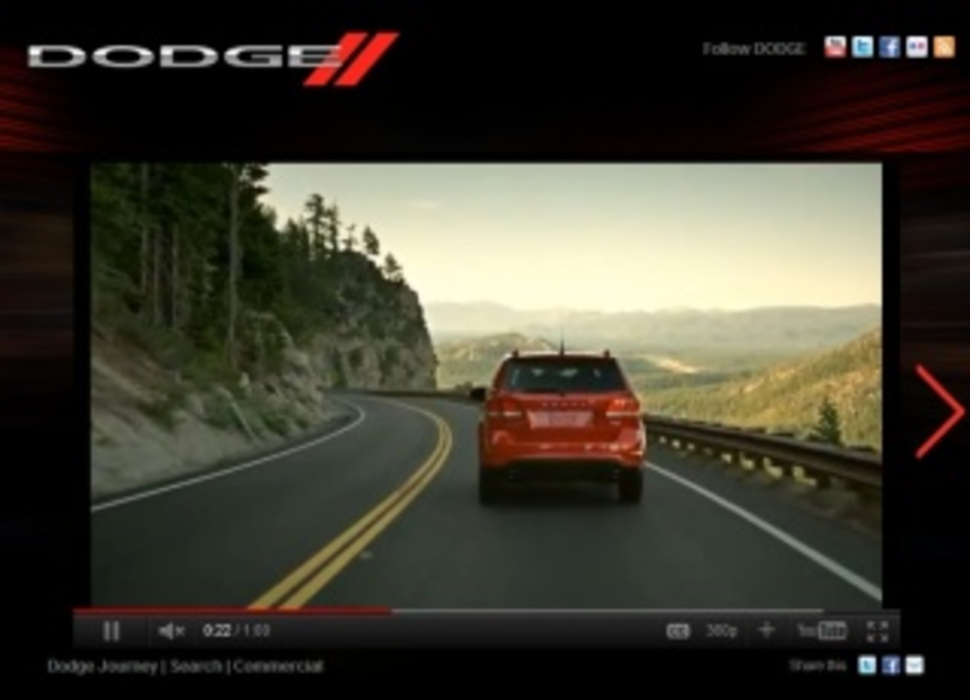 The Offer: The Chrysler Group launched a promotion in support of the 2012 Dodge Journey that offers consumers…

Longer search queries are becoming more popular year over year according to a report put out by Hitwise.…