The U.S. travel industry is soaring up, up, and away. According to a 2011 survey published by ITB Berlin, U.S. online travel sales are predicted to reach more than $137 billion by 2014 and more than $144 billion by 2015. With so many prominent online players in the mix, David McCarty, content management systems manager of Travelocity, says it’s crucial for vacation vendors to provide their customers with “richer” experiences.

“You have to be more aggressive. You absolutely have to go out there, market, and know your customer well,” McCarty says.

Through the help of Adobe CQ, an Adobe web-based application solution that assists in creating personalized online experiences, Travelocity aims to provide its customers with thematic and destination-based internal and third-party content, such as from World Weather Information Services. Before adopting Adobe CQ about 18 months ago, McCarty says Travelocity was using an “archaic” version of Vignette. And while Travelocity’s homepage, top-level entry points, and merchandising and promotional pages are all in the Adobe CQ system, he says Travelocity is still in the migration process.

McCarty explains that Travelocity implemented the Adobe CQ system to enhance workflow, deliver a quicker time for customers to find a bargain, reduce costs, and to find a system that would integrate well with its other Adobe tools. However, he says having a content-driven focus not only benefits Travelocity, but the site’s customers, as well.

“Internally…having this new platform in place is going to empower our authors. The people who are out in the field will be able to have control, whereas with the old system, it took multiple people, multiple steps, and multiple groups at different times to be able to do these same things,” McCarty says. “From the customer’s perspective, I think they’re able to get more frequent updates, relevant information, and a cleaner looking feel.”

But when it comes to content, the online travel industry takes a different path than other B2C companies.

“It’s a little bit different from a traditional retailer set because you have pretty set skews or a pretty set inventory that you have in your stock [or] in your warehouse. We don’t necessarily have that,” McCarty says. “We have all types of combinations of different [offerings]—whether that be cruise, flight, hotel, packages, combinations thereof—and it all goes across geographic information and time.”

In terms of who should be involved in the content management process that supports all that variety, McCarty acknowledges that it’s “more than what people might think.” For example, McCarty says members of the SEO, marketing, and development teams all add value when determining content’s context and site properties. In fact, he says that keeping the content management talent limited can often lead to content gaps.

“You definitely see the gaps happen, and there are misses or you have other people filling in,” McCarty says. “When you have other people filling in, you’re never going to get that clean quality and sense of ownership than when you have each none of those independent stakeholders involved. I think you have more of a team relationship. After you get through a few of those cycles, people really get involved and engaged because they do have that sense of ownership.”

McCarty adds that even Travelocity has been encouraging departmental fusion.

“Organizationally, we’ve flattened out and merged a lot of the organization,” he says. “A lot of the merchandising, marketing, and technology have been coming closer together and under one roof. We’re definitely working together as pods.”

When it comes to content, underestimating its value is one of the greatest mistakes marketers make, McCarty says. And whether accumulating content from third parties or creating it internally, McCarty says it’s important for businesses to have a plan of attack.

“It begins with understanding what your organizational needs are, what your targets are, and then where your gaps are as far as how you want to fill [them].” 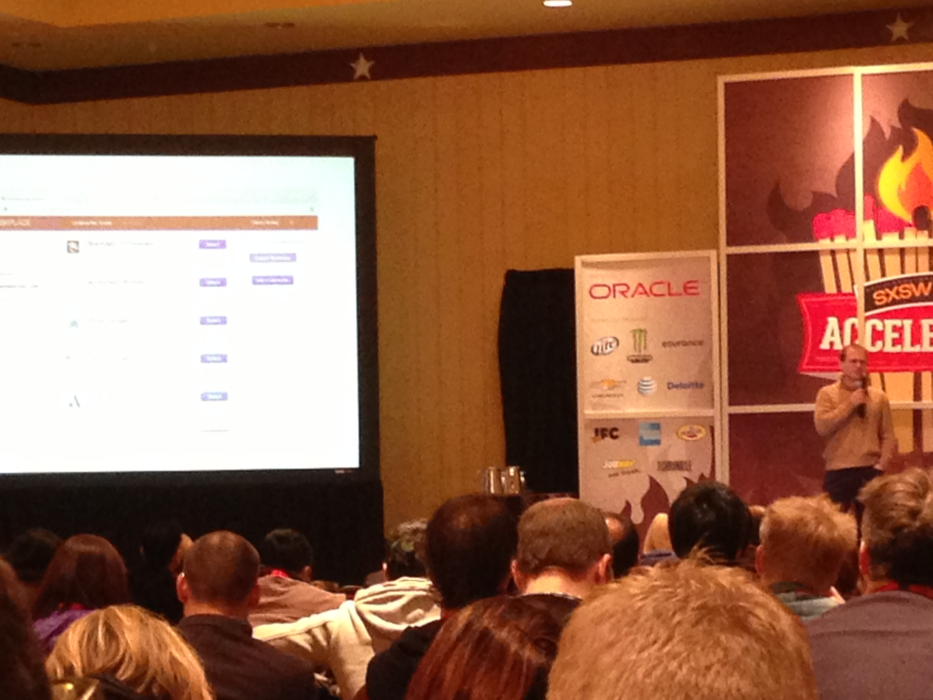 Three startups went head to head in the first session of SXSW Accelerator, the Oracle sponsored competition for…