Ending what is arguably the last bastion of advertising-free content online, RemarQ Communities Inc. is set to begin selling keywords in discussion groups.

The three-year-old San Jose, CA, provider of Internet discussion services to more than 1,000 ISPs and Web sites will launch Midstream Marketing on Aug. 23, a program that lets advertisers buy keywords within any combination of RemarQ's 30,000 discussion groups sourced from Usenet.

Under the plan, a keyword bought by an advertiser will be highlighted in blue if it's mentioned in a message posted on a discussion. A click-through leads to the advertiser's Web site. There is no ad next to the word or obtrusive commercial message.

“Banners clearly offer more room to present an advertising message,” said Phil Carpenter, director of corporate marketing at RemarQ. “But the keyword links that our advertisers can purchase through the Midstream Marketing program give them the opportunity to inject links to their sites directly into the transcript of a relevant Web discussion.”

Discussions comprise messages that enthusiasts post on subject-specific sections of Web sites on topics that can range from travel and computers to personal investing and automotive. These messages are not posted in real time, in contrast to chats that take place in an immediate or live environment.

The advent of keyword sales in online discussion groups doesn't surprise Lisa Allen, senior analyst of new media at Forrester Research, Cambridge, MA. Everyone is trying to make money on Web traffic in general, and community traffic in particular, she said.

“Community traffic has been both attractive and problematic,” Allen said. “It's attractive in that you get enthusiasts in niche areas, but it's problematic in that advertisers have been skittish about advertising in areas with little control.”

For example, advertisers' keywords could show up in a debate of which they want no part.

“That having been said,” she added, “the idea of being able to pinpoint an ad in a very narrow context is attractive and I certainly think it's worth for advertisers to try.”

The program, whose pricing structure RemarQ wouldn't disclose, will be offered in a variety of discussion-group packages and as a supplementary ad buy to flank an advertiser's banner ad campaign.

“We're pursuing two sets of customers: distribution partners and portals like Lycos, to whom we provide discussion groups, and going out and building traffic for ourselves,” Carpenter said. “[Also] we're targeting those advertisers and agencies that are known for experimenting with emerging advertising forms. We're hoping to attract advertisers in a wide range of categories.”

Among the charter advertisers is hosting services provider AboveNet Communications Inc., San Jose, which for three months has the rights to “Internet backbone”, “colocation”, and “Web hosting” in the computer and Internet categories. Also, Microsoft Corp.'s Expedia division is beta testing the program.

RemarQ is optimistic that insertion of links in discussions won't alienate or antagonize users who fear the invasion of privacy or unwanted commercial intrusion.

“We think this will offer users an added utility in a non-intrusive way and do not anticipate negative feedback from our viewers,” Carpenter said. “As the program rolls out, we'll listen to feedback from our users and make modifications, if necessary.”

But Forrester's Allen wasn't so quick to dismiss this concern.

“Community users are a particular kind of online animal,” Allen said. “They're very concerned about online netiquette and preserving and cultivating their space. They may be a little concerned about “Big Brother” reading what they're writing, even though there isn't a person who's there personally reading and inserting the links.”

“On an exposure level for advertisers, it sounds really neat,” Sinel said. “However, looking at it from a member experience standpoint, which is what communities have to keep an eye on, I'm not sure how [discussion group] members are going to react to their words being turned into advertisements for other products.” 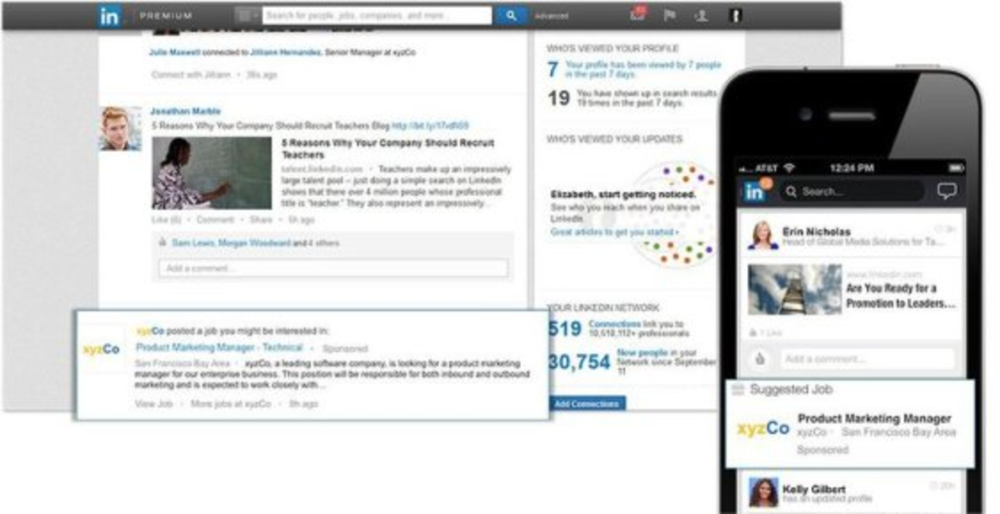 Yesterday, LinkedIn started surfacing “promoted jobs” to its users in their home page feeds.  It’s another bit of…