The new Ogilvy Business-to-Business Practice, to be led by Elaine Taylor, senior partner at Ogilvy, is intended to reflect the growing importance of the SOHO market to OgilvyOne's clients. Taylor will oversee a team of consultants in direct marketing, interactive, database marketing and advertising.

Toronto was chosen from 100 Ogilvy offices worldwide to pilot test the Business-to-Business Practice concept because of its concentration of BTB experience and knowledge.

“I believe this could be the first of many such practices in key offices around the world,” said Reimer Thedens, OgilvyOne worldwide chair.

Coinciding with the launch of the initiative, OgilvyOne unveiled the results of phase two of an ongoing survey into the Canadian SOHO market. The first phase, conducted three years ago, identified major trends in the small-business market.

The new study, conducted among 800 Canadian businesses, found that the number of self-employed Canadians continues to grow. About 17 percent of adults in 2000 were self-employed, compared with 14 percent in 1997. The average age of the SOHO owner is also on the rise. People older than age 50 run 43 percent of today's SOHOs; in 1997, the figure was 31 percent.

The number of female SOHO owners dropped to 29 percent of all SOHO owners in 2000 from 37 percent in 1997. That drop was not predicted prior to the survey.

The survey also found that most small-business operators feel their top priority is maintaining rather than building their businesses.

SOHO operators receive 15 direct mail packages a week, the study found, up from three packages in 1997. One might expect that the dramatic rise in mailings would translate into a decrease in receptivity to direct mail. However, the number of respondents who claim to open and read their mail has risen. In 1997, 33 percent did so. In 2000, the survey found that the number had risen to 44 percent.

Specialists in direct, interactive and database marketing will come together in the new OgilvyOne SOHO practice to generate proprietary research, compile secondary data, and design and implement business and marketing strategies.

Meanwhile, a study into the use of the Internet by small and medium-sized enterprises indicates that usage is growing rapidly.

The Canadian Federation of Independent Businesses found that Internet usage has become almost universal among larger firms, with 88 percent of firms employing from 100 to 499 workers connected to the wired world.

Internet usage is strongest in British Columbia, Alberta, Ontario, Nova Scotia and Prince Edward Island. Two-thirds of small and medium-sized businesses in these provinces are online. In Manitoba, New Brunswick and Newfoundland, connectivity is nearing the national average of 61 percent. 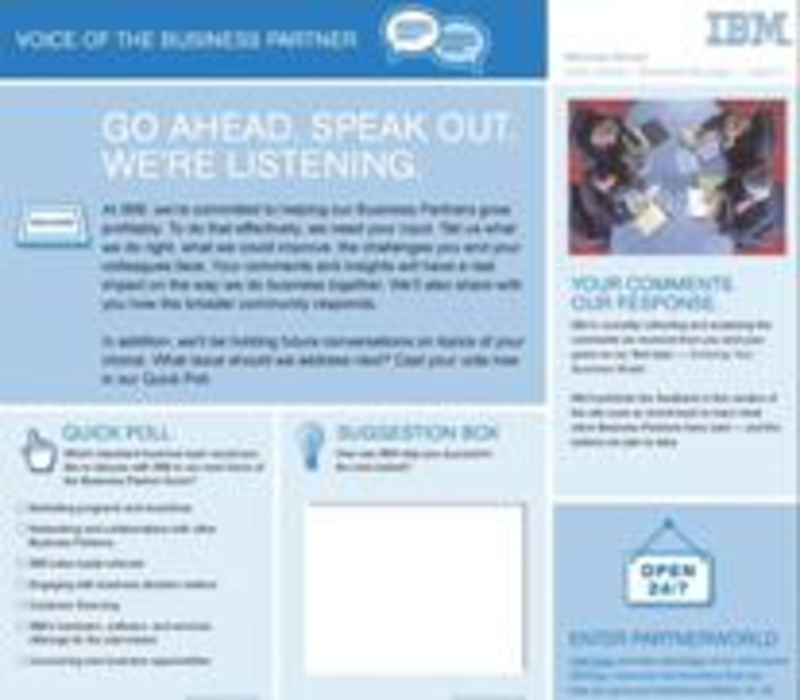 To reach SMBs, IBM goes for its channel partners