The mailing industry was concerned but not surprised by the language regarding Civil Service Retirement System funding and the lack of appropriations funding for the U.S. Postal Service in President Bush's $2.5 trillion fiscal year 2006 federal budget proposal.

Meanwhile, postmaster general John E. Potter discussed the possibility of higher costs for the postal service as well as on-time delivery and service quality at a gathering of more than 400 postmasters last week.

On CSRS, the Bush administration said in the budget proposal report that it “is committed to working with the Congress and postal stakeholders in early 2005 to bring about needed reforms that ensure that we have a healthy postal service for future generations. To this end, it proposes to use the pension savings provided to the postal service by the Postal Civil Service Retirement System Funding Reform Act of 2003 that would otherwise be held in escrow in 2006 and beyond, to put the postal service on a path that fully funds its substantial retiree health benefits liabilities.”

The language in the bill suggests that the administration wants the USPS to use the money in the escrow account to pay down future retiree healthcare liabilities.

“Mailers would like the escrow account to be eliminated and for the postal service to use the funds as they see fit,” said Jerry Cerasale, senior vice president of government affairs at the Direct Marketing Association. “One of the uses should be to delay rate increases [but] the White House does not want that.”

“If [the USPS] has to have an escrow account, what is suggested here is a good use of the money,” said Ellenor Kirkconnell, assistant director of the Alliance of Nonprofit Mailers, Washington. “But we would rather have the postal service be able to free up the escrow account.”

The escrow payment was addressed in a postal reform bill introduced last month by Rep. John McHugh, R-NY. His bill calls for replacing a provision requiring that money owed to the USPS because of an overpayment into the CSRS fund be held in an escrow account. Repeal would free up $78 billion over 60 years, letting the USPS pay off debt to the U.S. Treasury, fund its healthcare liabilities and mitigate rate increases.

“Our main position is that we would like to eliminate the escrow account as soon as possible, and then deal with retiree health benefits later,” said Bob McLean, executive director of the Mailers Council, Crystal City, VA.

Cerasale suggested that if the administration wants to do something with retiree health benefits, “let's look at a payment schedule. Just don't take all of it.” He also said the mailing community must push these types of ideas, and they are on the right track.

McHugh's bill also would return responsibility for funding CSRS pension benefits related to the military service of postal retirees — a $27 billion obligation — to the Treasury Department. No other federal agency must make this payment.

The USPS Board of Governors approved a request in September that included $227 million for emergency preparedness; $108.5 million for free mail for the blind; and $29 million as part of the Revenue Forgone Reform Act of 1993. This debt repayment would be the 13th of 42 payments on more than $1.2 billion owed to the USPS.

This request was submitted to the Office of Management and Budget. In December, OMB submitted its final request to the White House. It included only $61.7 million for free mail for the blind. This was the amount included in Bush's budget recommendation.

Congress now begins its work on the budget.

“It's an annual process that begins now, and we'll have discussions with the House and the Senate appropriations committees and see where it goes,” said Mitch King, manager of government relations at the USPS.

Speaking at the 35th annual legislative forum sponsored by the National League of Postmasters in Arlington, VA, Potter discussed the president's budget and other postal issues.

“Is there extra money? What about cuts? Think about the context in what you're up on the Hill for,” he said on the day the White House budget plan was to be released. “We've been asked to operate as a business. We think more people will use our services if the quality is high enough and delivery is on time. It's not about you or me. It's about universal service. If you talk me-me-me, we lose. We have a dedicated work force with a goal in mind; that's what will win on Capitol Hill. Don't get into the rate discussion. No decision has been made. It's not worth talking about. If legislation [or lack of it] drives our costs up, it will be reflected in rates.”

“I want to assure you that it's an absolute top priority to get the passage of a fair and comprehensive postal reform bill,” she said. “We're working closely with [National League of Postmasters] president Steve LeNoir to make sure that our rural communities have the same ready access to the postal service as that in our cities.”

Jim Miller, the new chairman of the USPS Board of Governors, noted the realities of the universal service mandate and the constraints of operating like a business.

“Legislation ought to address the issues, but not just for the short term,” he said. “We don't want to get nibbled to death, and we can't perform well that way. Share your views with legislators.” 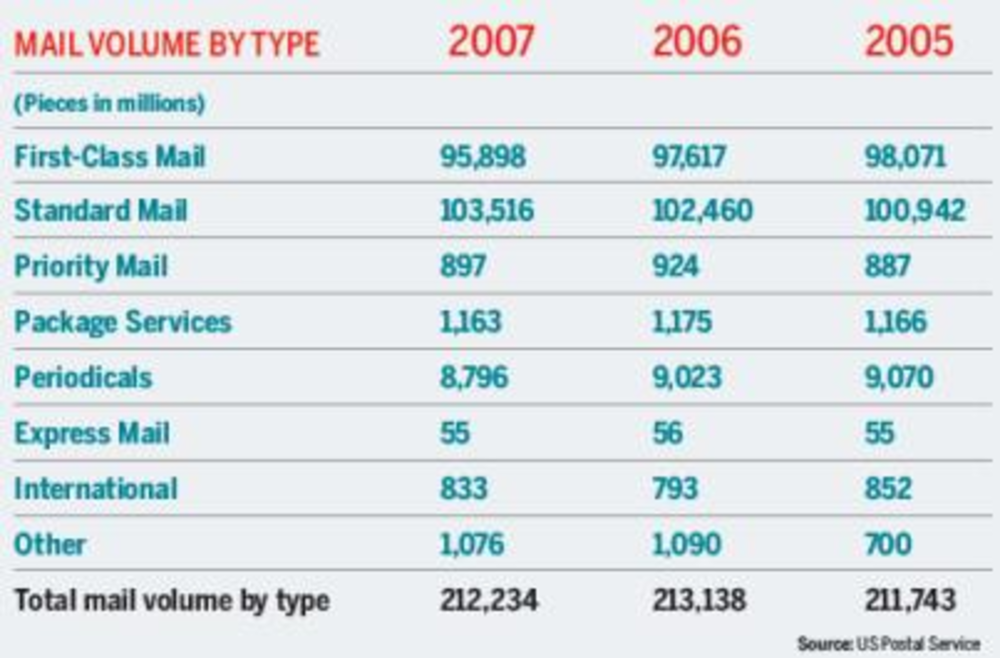 In its annual report for fiscal year 2007, the US Postal Service reports that it had a net…

Protagona Worldwide said yesterday that it has formed a partnership with Compaq Computer Corp. that will help Protagona…