Iowa wants its people back, and it is letting them know through mail.

Ramping up its direct marketing outreach, the Midwestern state late next month will mail 6,000 to 7,000 Iowa alumni or friends in the Dallas area an invitation to meet with Gov. Thomas J. Vilsack.

The governor and his wife will host a two-hour reception Nov. 1 in the Adolphus hotel in downtown Dallas. Representatives from a number of Iowa companies will attend, attempting to woo back the former residents who left for better work prospects or a more hospitable climate.

“We project a work force shortage when the baby boomer generation begins to retire, and we have to be able to fill those employers' work force needs,” said Nancy Pedersen, communications manager at the Iowa Department of Economic Development.

The mailer is the brainchild of the Iowa Human Resource Recruitment Consortium. Backers include the Iowa Department of Economic Development, Iowa Workforce Development, 80 businesses, communities and professional and higher educational institutions.

The formal invitation card is mailed to lists sourced from Iowa colleges and universities, particularly alumni who left the state in 1975 and afterward.

“We've developed a very good relationship with [the colleges]. They gave us access to their alumni lists, which if you've worked with them, doesn't happen every day,” said Kay Snyder, marketing team leader at the Iowa Human Resource Recruitment Consortium.

Created inhouse by the Iowa Department of Economic Development, the invitation requests a confirmation via an enclosed response card. Those who cannot attend are requested to visit the recruitment consortium's site, smartcareermove.com.

At the reception, Vilsack expects to sell Iowa's employment opportunities in advanced manufacturing, information solutions and life solutions. He will also promote the benefits of hobnobbing with friends and family back home.

“We do position it as a way to reconnect with Iowa employers and find out what are the opportunities for working and living in Iowa today,” Snyder said.

Vilsack's appeal, now in its third year, is intended to pre-empt problems posed by the anticipated labor shortfall. According to the governor's office, Iowa will need 567,000 workers by 2010.

“Our direct marketing effort is one important part of our state's overall strategy to attract more Iowans, younger Iowans and to have better-paid Iowans,” Pedersen said.

Since the direct marketing initiative kicked off, pieces and quarterly newsletters have gone out to nearly 215,000 Iowa college graduates and friends nationwide, though not all of them were invited to gubernatorial receptions.

“From the mailings that we've done, we have built a database of about 9,500 people who've requested to receive additional information each quarter,” Snyder said, adding the state could segment by job, location and area of interest.

“So we want to continue to try to build that relationship with them,” Snyder said, “so at whatever point in their decision-making process they are, hopefully Iowa is one of the places they consider.”

So far, Iowa has held six receptions of the kind it plans for Dallas. The last networking event was in February in Scottsdale, AZ.

Forty to 100 Iowa companies and institutions send representatives to each one of the gatherings. This includes Rockwell Collins, Principal Financial Group, Pella Corp., Maytag Corp. and Aegon.

The one-on-one outreach continues once the invitation's recipients have confirmed their attendance. A confirmation postcard will highlight the businesses that will be part of the reception.

After the reception, attendees will be mailed a CD-ROM for driving traffic to smartcareermove.com.

“Our first and primary audience has been Iowa alumni because we don't need to sell them Iowa,” Snyder said. “We just need them to know what's going on in the state now. So we're doing things to target those workers who have those skills that we would like to come here.”

Total development, printing and postage costs for the Dallas alumni reception invitations is estimated at $6,575, the same price tag for the Arizona get-together.

But Iowa is realistic about expectations from direct mail solicitations and networking events led by the governor.

Besides being a bit difficult to track without employers' cooperation, the marketing is being regarded as a long-term process that will yield benefits in the future.

“We do have hard numbers of 675 people that have taken positions in Iowa as a result of our efforts,” Snyder said. “Specifically, with the receptions we've done in the past, we know there's 90 people who did attend a reception who are now living in Iowa.”

Countdown to Changes in the TSR

As you surely know by now, the Federal Trade Commission published its revision to the Telemarketing Sales Rule…

CHICAGO – A&E Television Networks had a problem: How to drive viewers of its shows to become customers… 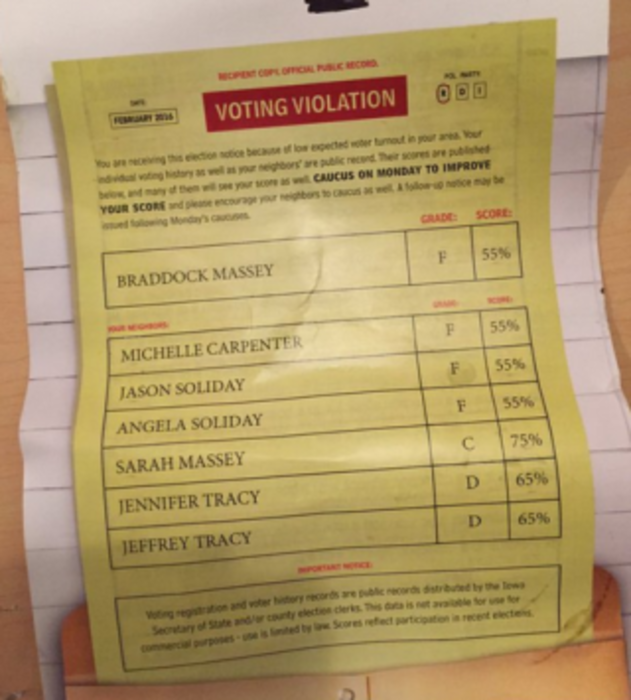 When is direct mail disruptive mail? When it helps a conservative senator whip a media sensation in the…