Bleeding From a Thousand Cuts

Not that the mailing business was ever easy, but the industry’s challenging economics seem to be getting tougher when it comes to managing the costs associated with producing mail.

Four looming issues threaten to squeeze the bottom line of mail service providers even more than they’re already being hurt by the rising costs for buildings, paper, equipment and employee healthcare and other insurances. The issues are metering costs, sales taxes, legislated costs and postage rates. These costs are conspiring to dissuade marketers from using the mail — not because it isn’t effective, but because it’s costing too much.

Metering costs. For the past several years, the U.S. Postal Service has prosecuted a plan to phase out mechanical and manually-set postage meters. Its primary interest is to implement devices that are more secure against fraud, tampering and postage theft. A secondary benefit is the ability of the newer digital meters to produce “intelligent” indicia; i.e., markings with imbedded information about the mail piece that enables various actions using that data, such as tracking, workload planning and automated postage verification.

While the USPS has advanced this process for its own technology- and security-based reasons, the meter manufacturers have benefited from a windfall of business. Old meters, with a life expectancy of decades, had to be replaced by newer, costlier equipment.

But the turnover also offers the opportunity to sell supplies for the new postage meters. What has gone largely unnoticed, especially among postal executives focused on their own issues, is that the new devices use ink cartridges like those used by PC printers.

As a result, meter users are looking at potentially huge increases in meter operating costs. Whereas the ink needed to print indicia using a mechanical meter would cost 5 cents to 10 cents per thousand impressions, a new digital meter (using an ink cartridge) has been estimated to cost $3 to $4 per thousand, or more — a cost that mailers’ clients will not swallow.

Sales taxes. Several states have or will be implementing changes to their sales tax codes as part of a movement to align those rules nationally, thus to facilitate the reciprocal collection of sales taxes on Internet and other remote sales. This activity often has resulted in changes to how sales tax laws apply to mail service providers, such as to cause sales taxes to be applicable to postage.

Industry associations are trying to activate their members to be vigilant for state legislative actions that would impose tax on postage; some also have tackled tax laws through political or legislative means. But frustrating these efforts are the difficulty of monitoring the flurry of activity during the typically brief session of most state legislatures, the challenge of detecting changes to complex tax codes and the inability of most mailers to react fast enough to influence their state’s legislative process in a timely manner.

Though the validity of states’ taxing postage often is framed as a constitutional question (Does the “supremacy clause” bar states from taxing the services of a federal agency?), no one has yet challenged a state in court, nor could most mailers bear the costs of the legal battle.

In everyday terms, taxing postage has the same effect as a postage increase — raising the cost of mailing by whatever percent is the tax rate of the particular jurisdiction. Such an increase, in addition to other costs (including the sales tax on the mailer’s other services) is yet one more reason, from the client’s viewpoint, to avoid using the mail.

Legislated costs. Many of you also know that Congress is doing its part to increase the cost of mailing — both by what it’s making ratepayers support and in what it’s failing to pay itself.

The notorious Civil Service Retirement System “fixes” (the escrow requirement and the transfer of liability for annuitants’ military service credit) still loom and, barring a miracle, will not be removed from mailers’ futures until such time (if ever) that Congress and the Bush administration can agree on the postal reform measures that would make removing the “fixes” palatable from a federal budget perspective. Without such agreement, the next rate increase will be about five or six percentage points higher solely to generate the cash to satisfy these two legislated directives.

Meanwhile, Congress has shorted the USPS on other repayments. First, Congress appropriated only $507 million to compensate the agency for its homeland security investment of about $779 million to make the mail stream safer from anthrax and other agents. Similarly, it approved only $61.7 million to cover the $76 million annual tab for congressionally mandated free matter for the blind and voting materials sent to citizens overseas.

Congress did come up with all of the annual $29 million “revenue forgone” payment for nonprofit and reduced rate mail. However, that amount still leaves other annual payments to be resolved. Unless Congress eventually settles its unpaid “revenue forgone” bill, the USPS will have to write off $800 million as bad debt — and ratepayers will have to make up the loss.

As a result, what Congress does, or fails to do, on legislated costs could increase postage rates and support the financial argument for not using the mail.

Postage rates. Last but not least is the consequence of the same inflation faced by the postal service as everyone else. However, the USPS is particularly susceptible to some factors that directly affect its cost of doing business and, in turn, what it must charge its customers.

For example, as the operator of one of the world’s largest delivery fleets, and the purchaser of substantial air and surface transportation from private companies, the USPS is affected by every upward tick in the price of fuel. Through August, the agency reported its fuel and utility costs were nearly 5 percent ahead of last year, and more than 5 percent over its budgeted cost, adding tens of millions in expense.

Though other cost cutting has mitigated the consequences of rising fuel costs, the postal service cannot recoup what it spends for more costly fuel in “real time” through temporary surcharges like those imposed by other carriers.

Then there are the twin matters of employee compensation and benefits. Though negotiated wage increases have been modest in recent years, there is no negotiation for many other benefits, such as the healthcare programs specified by the federal government, and the costs of those are rising rapidly.

The President’s Commission on the Postal Service recommended that postal reform legislation allow such benefits to be negotiated, but the postal labor unions quickly got that off the table. As a result, ratepayers will be laden with the cost of those benefits in the rates to be calculated as part of the next rate case.

It’s no secret that an omnibus rate case will be filed soon, likely in the first quarter of 2005. The USPS has said it will propose a phased two-year rate increase; i.e., one in which the increase on day one is matched by an equal jump one year later. At the end of the second year, the postal service would be poised to go back to the Postal Rate Commission with another rate request.

Though the industry might appreciate the regularity and predictability of such a format, the numbers behind the rate case are the bad part: a total increase of just under 10 percent if Congress grants relief from the CSRS “fixes” or a jump of 14 percent or more without relief.

Regardless, the effect of the increased price of postage will be felt just as marketers are losing their fascination with everything e- and rediscovering the value of mail. What many forecast as a boom year for mail could be followed by the reverse in 2006 when the new rates are implemented.

Searching for someone to blame. When a rate case is filed, mailers (and the media) instinctively wail that the postal service is again showing the brutal indifference of an unfettered and monopolistic giant disinterested in its customers. Whether such hyperbole was ever accurate, it isn’t today.

The postal service’s senior managers understand that every cent of cost not removed from the agency is a cent that could make the difference between the use of mail and the use of another medium. They realize that their agency — imperfect as it is — can survive only if there is mail to move and deliver. They’ve reduced complement and expenses aggressively and tried to manage their infrastructure despite the interference of Congress and resistance from most of the labor unions.

The next rate increase will be the result of costs that the agency largely cannot control, coupled with the burden of costs that Congress has failed to alleviate for its own political reasons. To ratepayers — the clients of mail service providers — that’s invisible; for them, it’s simply an increase in the cost of mailing. To that, add the costs from state actions to excise revenue from a relatively undefended sector of the business community, and the increased costs for using equipment (like meters). Clients see the bottom line, and it’s not very attractive.

All of this means that the mailing industry — including the postal service — is bleeding from a thousand cuts that collectively weaken the attractiveness of mail and, in turn, drain the raw material on which the industry and the agency depend. Just as one bandage will not cover a thousand cuts, no single fix will deflect all these costs. Nonetheless, mailers and the USPS need to cooperatively resolve these issues quickly before there’s too little blood left to sustain their livelihood.

First, there was King Midas, who turned everything into gold. Now there’s Jay Walker, who turns much of… 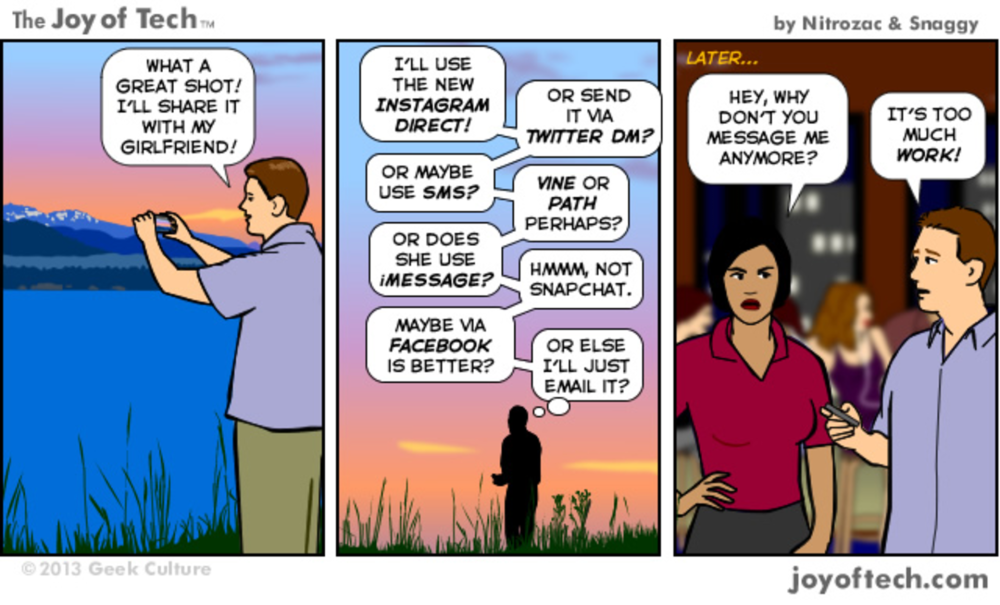 Comic: The Problem with Instant-Messaging Today