An Ode to My Favorite Small Business Owner

Case studies are my favorite type of story to write for Direct Marketing News. I enjoy hearing how renowned brands overcome trials and tribulations to reach their objectives and obtain ROI gold. However, these companies are often big-name brands with big-name budgets. When it comes to writing small business stories, it’s hard to ignore the challenges owners face in terms of being strapped for resources and not having vendors meet their needs. You don’t hear too many small business hero stories.

So when my 55-year-old mother, Geri Dupre, informed me that she wanted to open her own business in Pewaukee, WI, I wasn’t the most supportive. I mean, this was the woman who still refers to Siri as “Series” and calls one of the most popular social networks “The Facebook.” How was she ever going to master email marketing, social media, and online analytics, if I still had to give her instructions on how to copy and paste?

In a weird way, my mom’s announcement sparked a reversal of roles. I obsessed over my mom’s well-being the same way she distressed over teaching me how to drive or sending me off to college: Is she ready for this? Does she have everything she needs? Is there anything I can do to prevent her from getting hurt?

Of course, I should have known that my mom would take the same can-do attitude she had bestowed upon me. So despite my pleas for her to put her dream on hold and research what exactly running a small business entails, my mom signed a lease in late December and set out to open her store—Books and Looks LLC—two months later in March.

“When you have the opportunity to fulfill a dream that you have, you should go after it no matter what age you are,” she says.

My mom describes Books and Looks—an accessories, books, and fashion boutique—as a “combobulation” of past experiences. Geri graduated from Mount Mary University with a degree in fashion merchandising. She went on to work as an assistant buyer in women’s fashions in the late 1980s and worked at a jewelry store part-time while my brother and I attended grade school. After eventually taking a stab at being a flight attendant, my mom decided to explore the beauty sphere and received her aesthetician license from the Aveda Institute of Beauty and Wellness. She then took a few years off from working and finally (or what I thought was finally) decided to work as a bank teller at a credit union.

“For every job opportunity that I’ve had in my career, they’ve all been beneficial to me,” Geri says. “I may not have felt that the job was important at the time I was doing it. [But] now owning your business, you realize how important everything in your life that you did to get to this point has been…. I am so thankful that the jobs that I had dealt with the customer or were customer service related [because] that’s what I’m doing now.”

But throughout her many career changes, Geri’s most important role was always being a mom. And it was her desire to provide a greater life for her son that inspired her to make her dream of opening a store a reality. My brother Forrest, 27, was diagnosed with PDD-NOS (Pervasive Developmental Disorder Not Other Specified) on the Autism spectrum at the age of four. Although he’s intelligent and high functioning, businesses never gave him a chance. Watching him apply for job after job only to be rejected was disheartening. And while a few companies agreed to give him two- or three-month gigs, they never turned into full-time employment as we had hoped. So my mom opened Books and Looks and brought Forrest on as an intern to give him experience working among the very thing he loves the most: books.

Having two of my family members live out their dreams made my fear of them failing that much greater. I shared many of the emotions my mom felt when I first moved into my dorm: I felt compelled to do everything for her. I thought working for Direct Marketing News required me to write her whole marketing strategy and take charge of promoting her business. After setting up her work email and instructing her on the importance of Facebook pages, I realized something I assume every parent learns at some point: I had to let her grow up and do it on her own.

Looking back, I really should have had more faith in my mom. After all, this was a woman who sculpted a cake to look like Mount Rushmore for my brother’s history project. And I have to say, she’s turned into quite the marketing maven. Since launching her business Geri has run print ads in local magazines that are sent to homes within a certain income bracket and has conducted interviews with local news outlets. She also still maintains her Facebook page—even if it only has 38 likes at the moment—and even launched her own email newsletter. Although she’s only sent out two newsletters so far, they’ve had open rates of 31% and 28.9%, respectively.

Working in Wisconsin requires Geri to deal with the state’s seasonality, including its frigid winters. Given that Geri’s business is located on a beachfront off of Pewaukee Lake (yes, we have beaches in Wisconsin), she’s challenged with driving traffic to her store year-round. To keep people coming in, Geri turns to event marketing. From makeup demonstrations to scarf tying demos, Geri does whatever it takes to get people through her door. And to further advocate Autism awareness, Geri hosts fundraisers for local organizations for adults with disabilities. For instance, she hosted a book signing event this past April in which she raised $210 for the Adaptive Community Approach Program—a social service that my brother attends twice a week. Hosting her own social events for adults with disabilities is another one of Geri’s main business objectives.

Most important, Geri relies on her community connections. For example, she has promoted her social gatherings via the Autistic Society of Southeastern Wisconsin’s website. She also set up a table at her local bank to promote her store and is even providing discounts in the gift bags for her alma mater’s upcoming fashion show.

As much as I love to brag about my mom, I have to admit that her marketing isn’t flawless. She needs to learn that her target audience can’t just be “anyone with money” or simply based on her community instincts. Her email list also needs some serious cleaning. Plus, I’d be lying if I said that I didn’t worry about her going overbudget on her merchandise purchases (except, when she’s throwing in an extra dress for me–then it’s fine). However, I still have to give her kudos for putting the customer at the center of her business.

“I not only want to sell them the product, but I get to know them as best as possible,” Geri says. “My store is not just about selling things. There’s a whole story behind it with my son, and I think people like stories and they like to hear about why you’re in business.”

In terms of offering advice to new small business owners, Geri recommends creating a budget and having a clear business objective in mind. Yet, when it comes to providing marketing suggestions, she says that it’s really up to the individual.

“It’s kind of like you’re shooting dice,” she says. “You hope that what you went with or where you put your dollars for advertising is going to be beneficial…. I think if [people] knew all of the answers to advertising and what’s the most successful, we wouldn’t have all of these different outlets to choose from.” 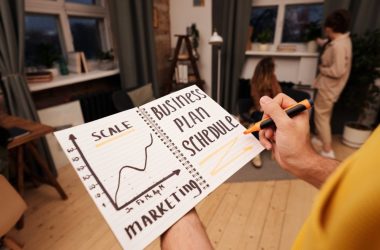 Successful digital marketing means learning to adapt and learn on your own, even if your previous talents are…